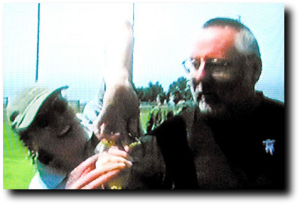 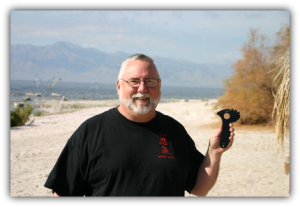 Master Peter Brusso started studying Judo at the age of 6. He continued with the arts all his life. Master Brusso was in the Vietnam War era, where Master Brusso continued to hone his skills. After his tour, he went to college and received his BSEE from Sacramento State. He continued to study: Wing Chun, Hapkido, Arnis, Ninjutsu, to name a few. He formed the art of Anjing Banfa in 1980 at LLNL.

He was in several magazines (Ninja Magazine) and books. He was also in the BBC special “Crazy Rulers of the World” Part 1. Then he is in the book “the men who stare at goats” in chapter 8. And finally, George Clooney plays him in the movie “the men who stare at goats.” Master Brusso also invented the self-defense weapon line known as the defenders. Those two got in both the BBC special, the book, and the movie.

You can also visit his personal page at http://www.peterbrusso.com

The rest, as they say, is history.